ParentalRights.org and Occupy, Hacktivists Working Together


On June 5th, protests took place all around the US as well as overseas against Child Protective Services (CPS) and promoting the passage of the Parental Rights Amendment. A more planned follow up event is coming in August. The amendment was authored by Michael Farris, founder of ParentalRights.org, where he serves on the board along with Grover Norquist. According to the many promotional pages on Facebook, craigslist posts and Twitter posts, objectives of the protest were:

A few of the links to these events can be examined here:

Hacktivists/Anonymous are behind this effort, but the promotional poster also has parentalrights.org across the top as seen here: 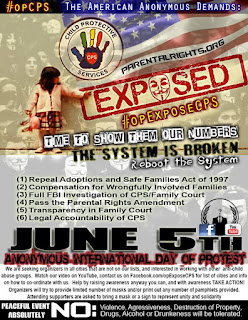 Anonymous hacktivists ("We Are Legion") have organized this event. There is no doubt that the organizers themselves are linking it with Farris' ParentalRights.org, as seen in many places. Here, they promote the movie put together by ParentalRights.org:

Most people would agree that there are serious problems with CPS, from both extremes. We have heard of cases where children were unfairly taken from parents as well as many cases where problems were reported and CPS did not act when they should have. Oversight and reform is needed, and few would argue that point. However, if the ParentalRights organization is knowingly teaming up with Occupiers and hacktivists to fight their battles, they are putting us all at risk. There is no doubt that the hacktivist movement has consisted of anarchists and Marxists. Is this the type of solution we are looking for? Do they think this is wise, to work on issues together with people of such radical ideology?

An email inquiry to parentalrights.org received a response from Michael Ramey, their Director of Communications & Research, stating that they were not the sponsors of this event, but they did give permission for their website to be used in the promotions.

"We gave them permission to use our name, since passage of the Parental Rights Amendment is among their primary goals. In that respect, we certainly stand with them."

We have seen this coalition with radical Leftists from Michael Farris and his fellow Convention of States Article V proponents before, and it has caused much concern among many conservatives. As argued here when it regarded Farris and the Convention of States working with radical groups, is there no limit to who you are willing to work with, or is the agenda all that matters? It seems only two conclusions can be drawn from these repeated coalitions. Either very questionable judgement is being used, or these Libertarian "conservatives" may not be conservatives at all.