This past week's Supreme Court (SCOTUS) decisions were devastating to many, with many areas of grave concern. From homosexual marriage to Obamacare to voter ID, this was a very left-leaning court with decisions that may have dire consequences.

Among those writing on the recent decisions, with an Article V Convention as the answer, of course, are Prof. Rob Natelson, Michael Farris, and others. What may be the most disturbing part of this comes from the article written by Michael Farris, where he actually suggests using the FDR "court packing" scheme:

FDR's solution to this problem was to limit the power of the individual justices by his famous court-packing scheme. He would increase the number of seats on the Supreme Court—they were old and over-worked and needed help. Armed with new appointments to make, FDR could remake the Court in his own image to achieve his desired political results.


Farris goes on to suggest a few ways something like this could work, using "superior political tactics."

My favorite is to follow FDR's court-packing idea but with vigor. Every state should be allowed to appoint a member of the Supreme Court. They could serve for a brief term, perhaps eight years. Removing Supreme Court appointments and confirmations from Washington, DC, is the only realistic way to ensure true judicial independence. Otherwise, you get the power cabal that we have in place which was clearly in play in this week's Obamacare decision. If Congress messes up, don't worry, the Supreme Court has got your back to preserve the relentless march towards the centralization of power.

Of course, all of these changes will require a constitutional amendment. And it would be naïve in the extreme to believe that Congress would propose an amendment to take away the power of their partners in power aggregation.

The only way these kind of changes can be made is through an Article V Convention of States. The Founders told us that there would come a day when the federal government would abuse its power. When that day arose, the States needed the ability to rein in the abuse of federal power by constitutional means.


Even in desperate times, is it the right move to encourage "court packing" and other schemes? If an Article V Convention is meant to correct past mistakes and corruption, should they be using the same underhanded, controlling tactics that FDR tried many years ago? Even many of FDR's supporters at the time refused to go along with it, and he was not able to get it passed. From "Enter Stage Right" magazine:

Everyone claimed some measure of victory. But in the end, the American people won the most because the Senate did exactly what its Judiciary Committee had recommended. The Senate "so emphatically rejected" FDR's court-packing scheme that no similar plan ever has been, or likely ever will be, "presented to the free representatives of the free people of America."


Apparently, Michael Farris and the people at the Convention of States beg to differ. 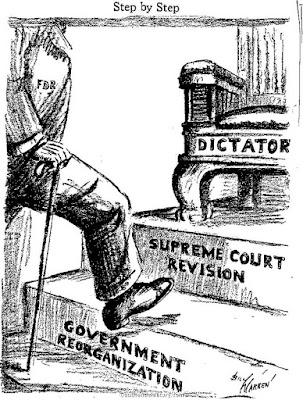